Home » Blog » Education » The Field Guide to Drinking in America

The Field Guide to Drinking in America

The Field Guide to Drinking in America

Learn the story of America through alcohol

If you’re taking a culinary road trip this summer, you’re going to need The Field Guide to Drinking in America. Author Niki Ganong spent 3 tireless years researching the alcohol related quirks of all 50 US states (and DC!)

Say you’re pulling into Terre Haute, Indiana on a Sunday and you’re thirsty for a beer, well, you might be better off taking a driving break in Illinois and waiting until Monday. Ganong tells us Indiana is one of only 12 states with Blue Laws that ban the sale of alcohol on Sundays.

The Field Guide to Drinking in America is “more than just a collection of laws and regulations” says Ganong. “It also tells the story of America through alcohol.” She tells the story with illustrations, graphs and quick reference sections that make this a book endlessly entertaining to flip through. One particularly nice touch is the use of locals to tell the stories of their own drinking cultures. Bartenders from across the country give insight and advice about their states to potential visitors 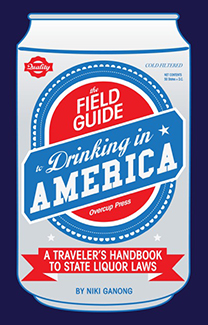 Each state’s laws are a clear expression of that area’s interests, needs and concerns

Now for the fun part: The laws! Some of the alcohol regulations make sense. For example, Alabama bans drunken pedestrians from walking along the highway (seems reasonable enough.) Other state laws just sound like no fun is allowed at all. South Carolina bans not only bungee jumping when inebriated, but also getting tattoos and piercings (saving plenty a nipple from a poorly reasoned and spontaneous decision.)

When Prohibition ended in 1933 it was left up to the states (and in turn to the counties and cities) to deal with the sale and consumption of alcohol. If we look at each state’s laws we see a clear expression of that area’s interests, needs and concerns. In Kentucky, for example, alcohol sales were illegal on Election Day until 2014. In the bad old days corrupt politicians would set up booths outside of polling stations and trade liquor for votes. Alcohol was not only seen as a threat to individuals, but to the whole of democracy itself.

Other cities, like Mobile, Alabama, are making alcohol more accessible in order to spur economic growth and create jobs. By lifting the ban on public drinking in designated ‘Entertainment Districts’ cities can attract bars and restaurants to formerly blighted areas (all the while containing drunken revelers to areas away from residences). This approach is becoming more and more common across the country as cities are increasingly interested in redeveloping long ignored urban cores.

There’s no easier way to get to know a place than to try to buy a drink (and sometimes fail.)

This is what makes The Field Guide to Drinking In America more than a collection of laws and regulations, but a reflection of American culture. With each state having its own distinct history and drinking traditions, there’s no easier way to get to know a place than to try to buy a drink (and sometimes fail.) Niki Ganong makes it easy to plan your routes so you never end up in the wrong place on a Sunday. So as you plan your perfect road trip, take along this entertaining read and prepare to learn what makes each of our 50 states (and DC!) so special.