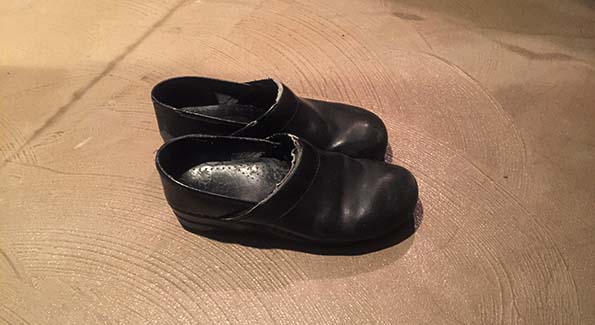 My first job was washing dishes at a small regional chain in Ohio called Bill Knapps (which still exists… sort of.) I didn’t have much of a clue about washing dishes, much less working in restaurants, so I just wore the same sneakers I always wore: used Pumas my mom picked up at the church yard sale. Pumas were second-rate from the start, so to be second-hand didn’t win much respect at school. They went from lightly grimy to untouchable after only a few shifts. Worse, my feet started to itch from the collected moisture.

After a few weeks, I took the hint from the other dishwashers and bought some rubber boots. They didn’t breathe, but we’d turn our boots inside out at the end of the night and run them with the mats – problem solved.

My next job was in a pizza place – another small regional chain that has since gone to be a national pizza powerhouse. I had taken a turn for the darker side of things. Mainly because I fell in love with a girl who in turn loved The Cure, Morrissey and Depeche Mode. That meant I needed a pair of combat boots. I picked up a pair at Goodwill, but after a month or two the sole on the right boot started to separate from the leather. I solved this easily enough by wrapping it together with duct tape. This had the added bonus of being even more “alternative.” Sadly, the girl went for the captain of the soccer team (I didn’t see that coming) and I got fired for smoking pot.

Me and those boots bounced around a bit. I made sandwiches for yet another small regional chain, delivered pizzas on and off and picked up dish shifts for a catering company. Soon enough I decided Dayton, Ohio was too small for me. I could work shitty jobs somewhere better. After very little research and even less planning I decided to find a shitty job on the West Coast.

The boots, however, were beyond done. I had a little money from working so I bought myself the first new pair of shoes I’d ever had: Timberlands.

The Timberlands went from new and shiny to dull and caked in flour as I worked at yet another pizza place in Portland, Oregon. It was the perfect job for an at-risk teenager 2000+ miles from his mother’s church yard sales. I was free. I got high with the assistant manager and then sliced onions on a hand-slicer. I once dropped acid before a shift and tossed a pizza dough into the rafters (I stood there for a solid 60 seconds, staring at the fluorescent light completely frying and not sure why the pizza wasn’t coming back down to me.)

The leather on the side of the Timberlands started to split, so I had to find a replacement. The pressures of paying rent, eating and keeping myself in weed meant I had to buy used shoes again. I didn’t mind, too much. What followed was a forgettable series of shoes, boots and jobs. I mainly worked in pizza places – easy work to get and easier to do. I worked in a bakery for a while, but working nights didn’t work for me. Then I got a job bussing table for a real restaurant. The kind of place that brought you silverware between courses (they had courses!) and put fresh tablecloths on every table. They gave me a white polyester shirt and $20 to get black pants. I showed up for my first shift in some ripped up Vans and was turned right around. “Get real shoes or no job” was all the manager told me.

One of the younger waiters pulled me aside as I was leaving. My head was down, my eyes looking over those Vans and I had no idea what I was going to do. I needed the money for more than shoes. Where do I even get nice shoes? I was thinking about how hard it is to boost shoes from the discount store since they only put one out and you had to get the match from a window when you paid.

“Hey man,” He was only a few years older than me. He had dirty blonde hair and a rock star jawline. “You’re my replacement, you know. I got promoted to waiter. Big money!”

I looked him over, trying to make friends – it’s never easy being the new guy. “Cool.”

“You’ll get there. What size you wear?” He looked at my dirty sneakers. “I have my old clogs.”

“Clogs?” I had no idea what he was saying.

“I can’t take your shoes man.”

We agreed on terms to be paid later. That was my first pair of Danskos. They were already pretty beat, but they fit perfect. I took my first real step as a restaurant professional in those clogs.