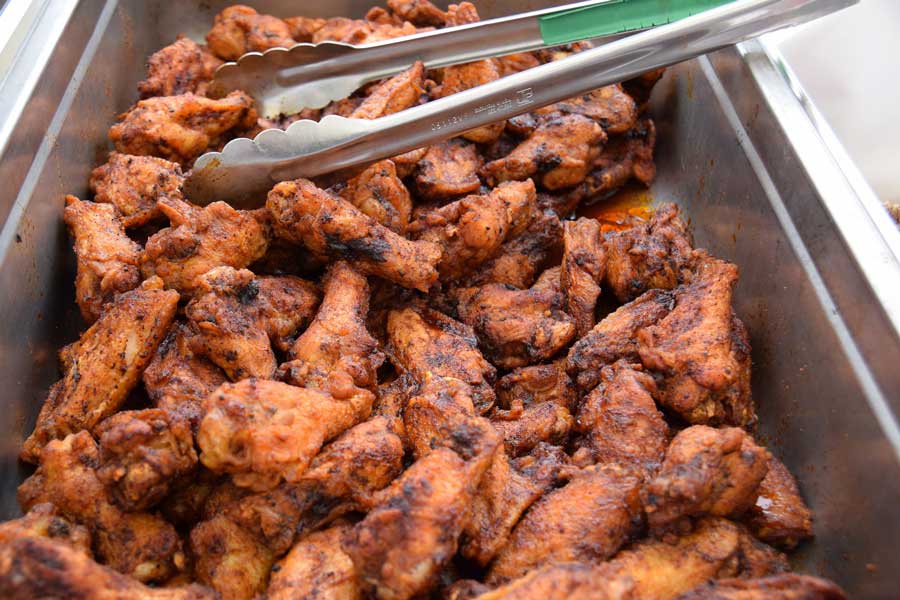 Fried chicken is as American as apple pie – whether as sandwiches or parts. Where is this iconic dish taking us in 2017?

Fried chicken is, arguably, a dish indigenous to the U.S. Buttermilk soaked, flour dredged, and deep fried is about right. It holds on as a favorite year after year. From the Colonel’s recipe to white tablecloth variations, fried chicken is comfortable, familiar and delicious. Where is it taking us along the culinary landscape? Are there many twists left in this road?

We think so – here are a few directions this iconic dish is going:

The lean towards family-style, shareable, communal, group love of food, positions fried chicken directly under the spotlight. The variety of cuts allow for myriad tastes to be satisfied. Big parts, little parts, boneless parts, seasoning shakes, drizzles, butters and gravies, all give way to satiating the demands of the dining social.

Chef Marcus Samuelsson is serving whole birds at Marcus, his newest restaurant in the just-opened National Harbor MGM. Both a striking presentation as well as the promise for honest eating, the “Fried Yardbird” for the table is a perfectly constructed dish to fit into the communal dining scene.

A tangy-sweet slather of honey across the pebbly surface of crispy legs and thighs is not a new idea. But, that honey rolling off the warm rivulets of fryer oil is coming back. Honey Butter Fried Chicken in Chicago is going hard by lacing whipped butter with honey. The low pH of honey — higher acid — makes the sweet condiment perfect for cutting through the fat of the oil crust of a fried bird. Sweet, savory, hot, cold, the embellishment is the study in contrast. Look for honey and honey spreads to ride along with chicken baskets as this oldie becomes new again.

The provenance of local ingredients isn’t even a discussion point anymore. It is an expectation that at least a few ingredients will have some local and/or seasonal tie-in. Chicken is no exception. Area farmers are making their heritage breeds available for restaurants and those monikers are valuable. Whereas fried chicken can be had along any stretch of fast food spots, to get the Millennials interested, use Amish chicken and suddenly your fried chicken is even more worthy of a contender.

Shake Shack is setting ‘em up and knocking ‘em down. Sticking to their genes, the chain makes quick work of dispensing a well-crafted sandwich that has long been their beacon for attracting devotees. It follows that chicken sandwiches featuring fried breasts would gain favor. This past year, we saw burger darling Shake Shack enter the field with a fried chicken contender. The boneless approach makes fried chicken less of a fuss while fitting neatly into the lunch daypart. Shortly after the riotously successful test launch of Shake Shack’s varietal prompted the chain to get the sandwich into all of its US locations.

Southern food is glowing white hot. Not soul food, necessarily, but food with soul. Chicken and waffles — while actually an invention from the north, but claimed by the south — has been around forever. In the last few years, its ubiquity is unmistakable. Signaling the start of the fried chicken revolution version 2.0, fried chicken and some version of waffles is looking much like shrimp and grits did 5 years ago. Take Sweet Chick’s array of chicken and waffle combinations, like The General with a broccoli waffle under General Tso fried chicken, or the Cordon Bleu combination with ham, gruyere and a thyme-studded waffle.

Buffalo is not the only place dictating how fried wings should be dressed. Thai wings, that mash-up of fried chicken with the flavors of the south Pacific, make a nod to a funkier approach. Artful plays on wings are another option for fried chicken’s flight. Going even further, LA’s Greyhound Bar & Grill gets truly gritty with beyond the pale flavors like Hunan BBQ, jerk, honey sriracha, and tandoori.

When Gus’s Fried Chicken recently opened in Chicago, the place was mobbed; like that crazy busy where the line trickles out the door and snagging a seat is a pipedream. Any surprise? Chicken is king. Make it ever so slightly appealing by pumping up its fried alluredness with another layer of flavor and you have a win. Whether it is pickle brine, a slather of spicy glaze, a drizzle of the sweet stuff or anywhere in between, we are madly in love with the crispy, oil-bathed fowl languishing on the summit of our shared gastronomic geography.