Ode to The Deli Container 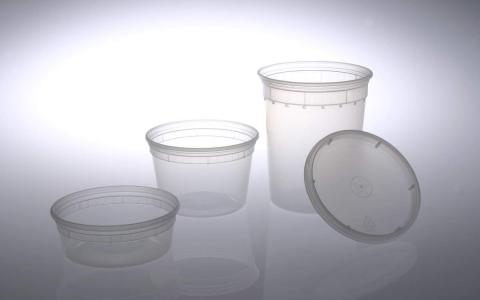 Ode to The Deli Container

There may be no single object so important to a restaurant kitchen, yet so uncelebrated, as the humble plastic deli container. While we oooh and aaah at Viking stoves and All-Clad pans (which are pretty great), we tend to overlook this essential piece of restaurant equipment. Before the deli container, line cooks and chefs were in the dark ages of covering cambros in shrink-wrap – which had the failure rate of the North Korean missile program. In this modern and enlightened era, it’s no thing to set up your mise en place hours ahead, clean and portion delicate herbs or save that last bit of soup at the end of the night.

To this day there’s something uniquely satisfying about opening a deli container. The sound is difficult to describe, but some of our more informed readers already hear it in their not so distant memories of last night’s service. They’re cheap too, available at the restaurant supply store in long sleeves for less than 14¢ a unit (ok, so the lids come separately, but the point stands.)

You can wash them in an industrial machine, you can drop them into your water circulator or combi-oven and they don’t melt in a microwave. The lids are interchangeable and built for stacking so it’s easy to portion out ingredients and keep them in a low-boy or reach-in. During service, the cooks can just work their way through the prep with a very clear sense of how many portions they have before an item gets 86’d.

It’s hard to imagine a restaurant kitchen without deli’s. It’s like removing fire or knives from the equation and expecting anything to move through the window. I still remember trying to work with the standard cambros, all of them cracked and partially melted, none of them with the right lid. There was always that one that never fully recovered from that night the Sous made curry for staff meal. Those were long and difficult days no one is motivated to revisit.

So this week, as you work your shifts, pause and give thanks for the humblest piece of restaurant equipment out there. The deli container deserves its day in the spotlight and its place among the constellation of essential small objects that hold our worlds together. While we need our CaptiveAire hoods, Japanese chef knives and our gas stoves, we can’t forget the band aids, sharpies and deli containers that make the job of cooking more than just a little bit easier, but possible at all.