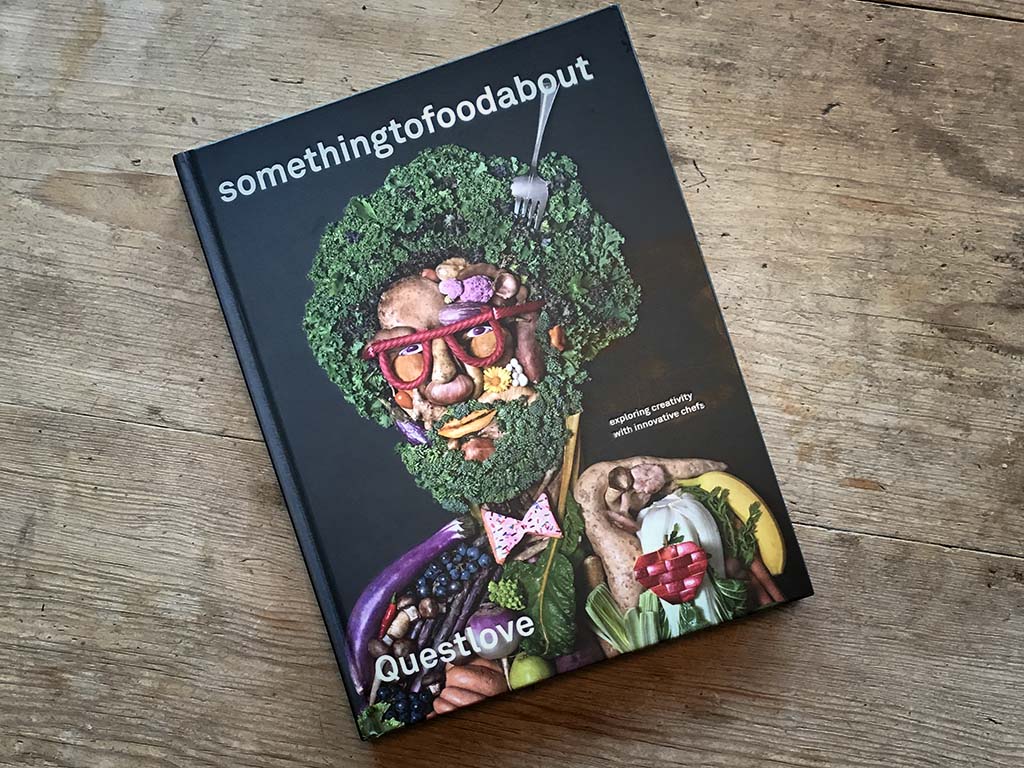 “Is that a book by Questlove about food?! That’s AWESOME.”

That’s what some guy in line at the bookstore yelled as I stood 30 people behind him. He was kind of a bro, too – dressed in shorts and a polo shirt (the official uniform of the ‘My Dad is a Lawyer’ set.) I can’t imagine much I’d have in common with the guy, either – but it turns out I probably do have at least two common interests: Hip Hop and Food.

And that’s pretty much what somethingtofoodabout is about – how the love of food and music brings people and ideas together. Questlove writes “This is not your typical food book. It’s more about the ideas behind the food. Think of it as a tour through different food studios. It’s getting inside the minds of these artists.”

somethingtofoodabout is written as a series of interviews with 10 of today’s most forward thinking chefs and foodies. It spans from the modernist (as emobied by Nathan Myhrvold) to the classic. Each interview strikes a personal tone, as Questlove focuses on creating conversations and discovering something new about each Chef’s perspective.

That doesn’t mean the book doesn’t address some very real issues. Most notably, Questlove is interested in hearing about diversity, or the lack of it, in fine dining kitchens. “There aren’t large numbers of black or Hispanic chefs in charge of the country’s best restaurants. The same low-representation problem affects female chefs as well” he writes. He handles the issue not by seeking out minority and female chefs since “that would have been a kind of tokenism, a gesture that would have sidestepped the problem.” Instead he talked to the chefs that interested him and asked them why the food world is so white and male dominated and lets the chefs give their own bit of insight on the issue of diversity in the food industry.

It’s this approach that makes somethingtofoodabout so interesting and thoughtful. Just as a dinner party or a barroom conversation can bounce from being amusing to political to controversial, so do the interviews found in the book. Instead of pursuing a thesis, Questlove lets the chefs talk through their processes and goals. When an issue like diversity comes up, they don’t try to obscure it, but they give their own opinion from their own perspective. While the book only scratches the surface of why restaurant culture is struggling with diversity, it starts a conversation I expect to see continue in the coming years.

somethingtfoodabout is also just a lot of fun. You get to read about Michael Solomonov working at a Subway Sandwich shop in Israel, how Jesse Griffiths thinks we should eat more feral hogs and that Austin, TX is Questlove’s second favorite city (I’ll let you all figure out his first.) You also get treated to some excellent photography by Kyoko Hamada, who treats both her human subjects and everyday objects with humor and intimacy.

When I next see my pop-collared bookshop bro, I’ll let him know somethingtofoodabout is indeed a book by Questlove about food, and even further, it is freakin’ awesome.

You can grab a copy of your own at Powell’s Books.