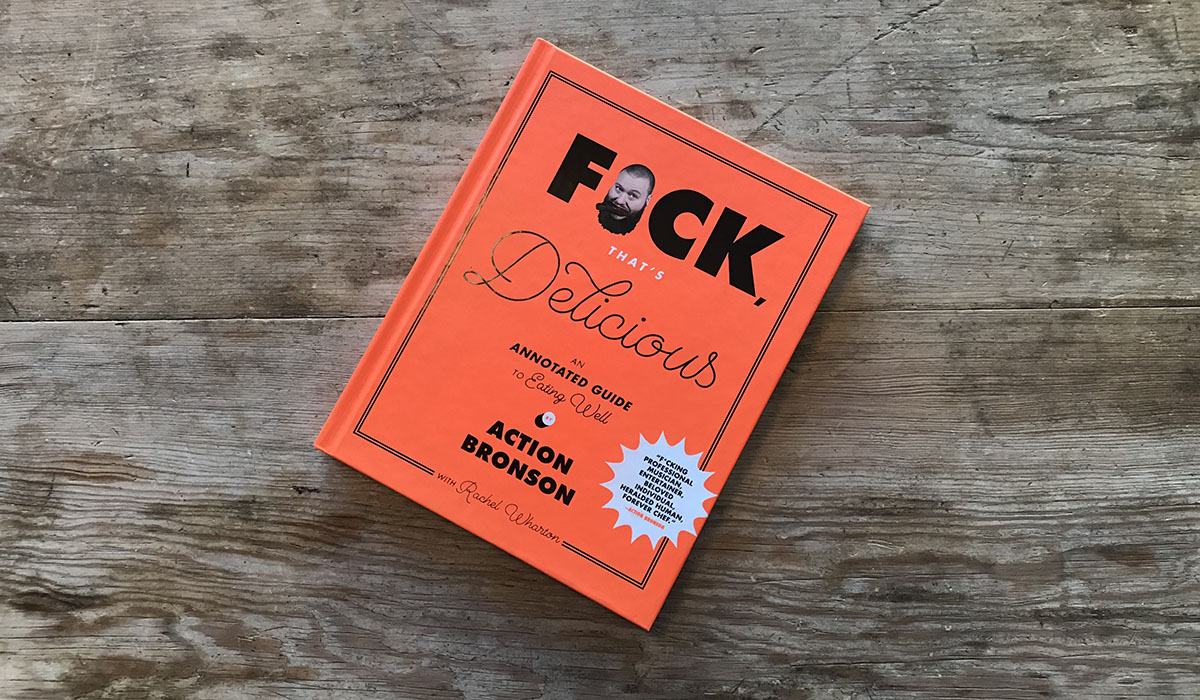 Action Bronson is at it again with his book F*ck that’s Delicious. It’s a wild ride worth taking.

Here’s the deal. I’ll review just about any book that weaves together food and hip hop. I recently looked at Questlove’s somethingtofood, an exploration of creativity through interviews of famous chefs. Action Bronson, with his new book, F*ck that’s Delicious, charts a somewhat louder course through the culinary landscape. The first hint that this book is not for the faint of heart? It’s bright safety orange.

Bronson kicks things off with a discussion of his favorite cold cereal – Crispix over the sink – and then explains the traditional Japanese stew called chankonabe. At first, I was trying to find the connection between the two foods. Why go from cereal to a meal served to sumo wrestlers? They’re both in bowls? After really putting my dropped-out-of-the-English-department education to the test I did realize the connection: they are both fucking delicious. Thus begins Bronson’s guided journey through things you should go out and eat already.

As you flip through the pages (and you’ll flip around a lot just to look at the gorgeous photos and creative layouts) it becomes apparent you don’t need to read this cover to cover. Just pop it open and see what you get. Bronson bounces from food to food, culture to culture, memory to memory like a guy you met at a party who just wants to talk to you because he’s been somewhere amazing and eaten something mind blowing. It’s almost like a backseat freestyle about food. The bars go from bagels to charred broccoli to pairing white truffles with vanilla soft serve. There’s no order to Bronson’s universe – it’s all just happening as it happens.

While this isn’t a cookbook, there are recipes scattered through the pages. Of particular interest to me was the Explosive Chicken. In Bronson’s words “this is the chicken of all fucking chickens.” I’d also point you to the recipe for egg noodles with feta and paprika. Again, in Bronson’s words “now this is a fucking pasta.”

You may notice that Bronson says “fuck” a lot. Sometimes, a book about food that features a lot of swearing can feel forced, like the author is trying to ‘keep it real’ (looking at you, Thug Kitchen.) In Bronson’s case, it feels like unbridled enthusiasm. It’s not a marketing gimmick meant to make the book stand out on a shelf (I think the orange cover does that just fine); it’s just how Bronson talks when he really believes in something. And he really believes in delicious fucking food.

If you’re looking to get inspired, grab a copy of F*ck that’s Delicious. Working in a restaurant is one of the hardest jobs around, but it’s the food that makes it all worthwhile. It’s easy to forget all those moments over a sink, or standing on a corner, or sitting at a bar eating something impossibly good. Action Bronson captures that moment when you can’t help but reach for another bite like few artist have. For all its bombastic appearances, this isn’t a book about Restro-Bro culture – it’s a book about the love of delicious food.