If 2018 had a motto, it’d be “ok so that happened.” From the midterm elections, to Kanye not knowing when to stop talking, to the leader of the Free World picking fights with Canada, to Hell’s Kitchen getting an 18th season, to an inverted yield curve leading to stock photos of bankers holding their head in their hands, it’s been a weird one.

As with any year, there have been a few trends that have worn out their welcome in 2018. Here’s our non-scientific and non-comprehensive list of things that can stay in 2018.

Air – Moon Safari.
Restaurant music is a touchy subject. A good restaurant soundtrack is upbeat and interesting, but not too upbeat and interesting. It should be catchy music that’s easy to ignore. The French pop band, Air, must have set their sights on their music playing in every dining room in America when they released the album Moon Safari in 1998. But now that it’s been twenty years, it’s time to give it a rest. At this point when I hear the opening baseline to Kelly Watch the Stars I start polishing flatware like a Manchurian Candidate programed to do side work. 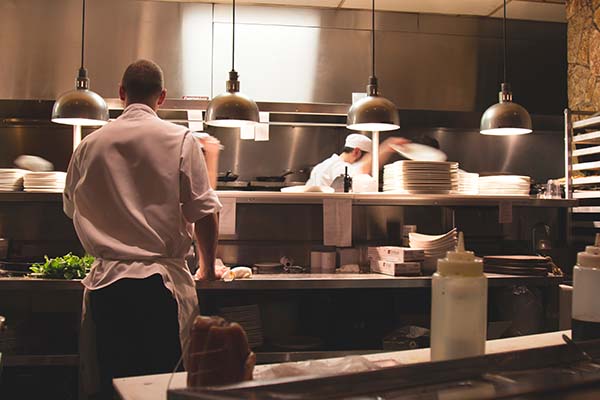 It’s a good photo, which is why nearly every restaurant related software company has used it on their websites (including yours truly.) It has all the essential elements of an effective restaurant stock photo:

•  A dude in a toque (This is a fancy kitchen)
•  Short haired Chef-y guy with rolled sleeves (But people be working)
•  A motion blur (People be working real hard)
•  Microgreens (We’re on that farm to table tip)
•  A possible health code violation (Is that room temperature cured meat in the foreground?)

As much as I like this pic, it’s time to move on to something new.

Montucky Cold Snack
Look, I applaud anyone who starts their own business. It takes a lot of determination and vision to make a successful company. So I almost feel bad for wanting all traces of Montucky Cold Snack to be consumed by a dark howling fog like the bad guys in Ghost. Almost. My primary issue isn’t that the beer is terrible, which it is, but that it’s built purely on marketing. It’s the “Unofficial Beer of Montana” but it’s brewed in Wisconsin (in the same facility as Milwaukee light.) It has hipster-clip-art can design. They donate a percentage of profits to non-profits (which is actually pretty cool, you got me there.) And lastly, it’s fucking ubiquitous, at least in the kind of bars where there’s an ironic deer-head mounted somewhere even more ironic (like in a restroom.) It’s ok to accept that cheap beer is a heartless industrial factory-to-table commodity product.

Vaping
Vaping was also canceled in 2017, and in 2016…. But maybe this time people will listen. If you’re going to smoke, then smoke. If you’re looking for an alternative to smoking, then quit smoking – that is the alternative. People say, ‘well, I don’t like how smoking smells.’ Well, then you don’t like smoking – quit. Smoking at least looked cool when it was Lou Reed and Andy Warhol. Vaping just makes dudes look like they trade memes on obscure subreddits about hobbits and My Little Pony. So now that 2019 is here, let’s put down the… pipe? Vape-stick? I don’t even want to look up what it’s called. Next!

2018
When historians look back on our civilization, and then gaze out from their bio-domes at the heat-blasted desert plains of Northern Saskatchewan, what will they think of the year 2018? Whatever they think as they humbly serve their autonomous robot overlords, I hope it’s a year that marks a change in perspective. Instead of blaming each other, people come together with the goal to make a better future for everyone. Instead of trying to win for their perceived team, they realize what’s best for society is a better society.

Or, it may be the year when an algorithm designed to help automated check stands recognize ‘unexpected items in the bagging area’ became sentient and decided to wipe most of us out. Time will tell.