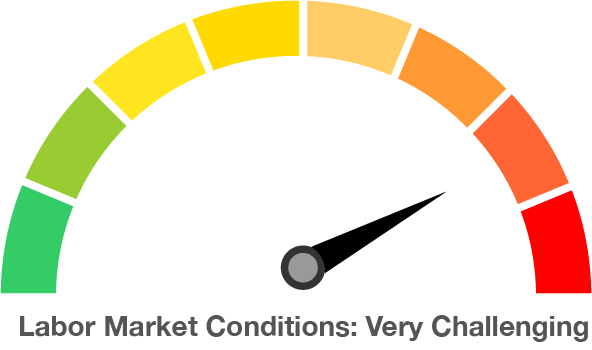 You guessed it, the industry is still highly competitive right now — but here’s what we saw in hospitality employment for August!

Hiring has never been easy — and this year, it’s just that much more difficult. Things are still looking up, but we have yet to find that nice balance between employers needing workers and workers needing work. Nevertheless, our industry is trucking along, even amid the sobering reality that we’re not entirely out of the woods. August brought on new spikes in COVID-cases, reimplemented mask mandates, and many of us holding our breath that we get past this Delta Variant rise without further restrictions. With that said, here is what we saw on Poached in August and a breakdown of what the Bureau of Labor Statistics (BLS) reported in their August employment situation summary concerning the food and drink industry.

Employer Activity
Since April, when we started this series, and when the vaccine became more available to restaurant workers across the country, we’ve seen a steady increase in jobs posted month after month. August proves no different. We saw a 15.5% increase in jobs published in August compared to April and a steady average of 4% increase in jobs posted over the last four months. So while we’d love to see a turnaround in how competitive hiring is right now, hiring is still challenging. However, the BLS’s report shows that employment in the Leisure and Hospitality industry may finally be leveling out.

The BLS Employment Situation Summary reported that job gains in the Leisure and Hospitality industry remained unchanged in August. After six months of averaging an increase of 350,000 new jobs per month, August marks the first time that the Leisure and Hospitality sector was not the leading industry in job gains. The balance occurred with an increase of 32,000 new jobs in arts and entertainment, while food service and drinking establishments experienced a decline of 42,000 jobs in August.

Worker Activity
While employer activity is all over the place, the good news is that worker activity is still increasing. On Poached, August showed a 39.7% increase in applications filled compared to April and a 12.7% increase in new resumes uploaded or created. This indicates that workers are ramping up to re-enter the workforce, providing a decent outlook on employment moving into September. In August, we launched our first job seeker app for both iPhone and Android. Since the public launch, we’ve seen an average of 7.92 applications submitted per app user.

According to the BLS report, unemployment decreased by 0.2 percent, bringing the overall unemployment rate to 5.2% in August. The labor force participation rate remained unchanged and came in at 61.4% for August, compared to 61.7% in July. The employment outlook is improving, and workers are returning, but we’re not at pre-pandemic levels yet. Employers still need to put their best foot forward when hiring and update their job posts to attract the best candidates.

August came and went, and while we’re not totally on the other side of the pandemic — things are still on an upward trajectory, and the restaurant industry is slowly recovering. September will be an interesting month — with schools starting back up, removing the teenagers from the workforce, and the unemployment booster and pandemic-related programs set to expire. We could be in for another rollercoaster month — so buckle up!