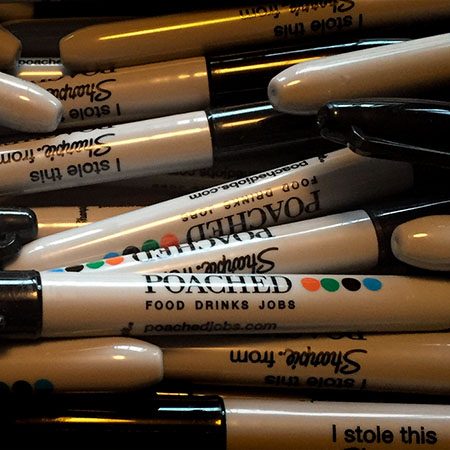 In honor of one of the greatest tools used in modern restaurant kitchens, we at Poached would like to offer a short history of the Sharpie Fine Point black marker.

The Sharpie Fine Point black marker is introduced. The Sharpie is the first pen-style permanent marker, setting the standard for many imitators. It’s an immediate hit, as it writes on almost any surface: glass; wood and stone; plastic; metal; and paper. NBC talk show hosts Johnny Carson and Jack Parr are signed as celebrity endorsers, making Sharpie an instant household name.

Terrell Owens was well known for his gentlemanly behavior on the football field. He conducted his touchdown celebrations with the utmost class and dignity. One fine example of his commitment to sportsmanship was during a Monday Night Football game when he scored a touchdown, pulled a Sharpie from his sock and autographed a football.

Since Sharpie can write on nearly any surface, it’s a mainstay tool for American teenagers looking for an outlet. In a pinch it can serve as nail polish, a way to put gothic highlights into hair, a means of political expression (note: also requires a wall) and much, much more. The Sharpie’s importance to a generation’s cultural identity was captured neatly in Kimya Dawson’s song Loose Lips from the Juno soundtrack.

After all the Sharpies went missing in a small restaurant located in the heart of Seattle, a frantic search was mounted of the entire facility. Carl the host was caught with over 50 Sharpies in his locker. Everyone hates Carl.

Poached sends Sharpies to cooks and servers all across the world! We know how important the Sharpie is to the smooth operation of any restaurant, so we’re happy to pitch in and make your world a little brighter. If you want in on our Sharpie giveaway simply send your restaurant’s name and address to blog@poachedjobs.com. We’ll drop some FREE Poached Sharpies into the mail for you to lord over your co-workers!