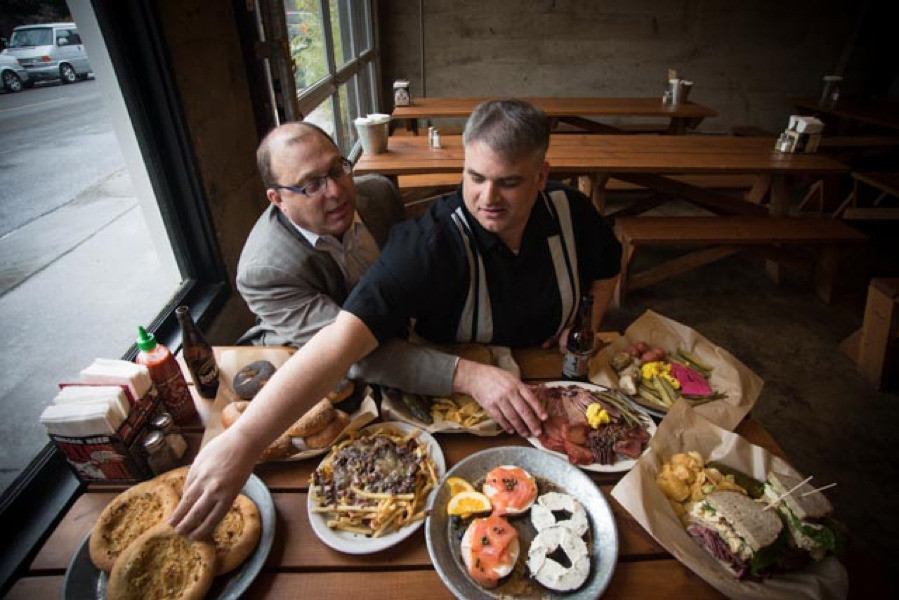 Immigrants and restaurants have a long association with each other. Restaurants provide jobs and opportunities to recent immigrants, who in turn provide much needed labor and experience. As part of our continuing interest in immigration policy, we’ve been discussing the issue with restaurant owners and managers. We were recently lucky enough to talk with restaurant owner Nick Zukin. He founded both Kenny and Zuke’s, now a Portland institution, as well as Mi Mero Mole, a counter service restaurant specializing in the street food of Mexico City.

Restaurants have a long history of employing recent immigrants. Do you often hire or work with immigrants?

Yes. I come from turn-of-the-century immigrants myself. The heart and soul of this country is built on people who are looking for a better life. I think our country is better off by welcoming people who have such ambition to go to a new country and try to make their life better.

With immigration issues in the news, how are you addressing the needs of your staff?

We have good relationships with our staff. We have low turnover and have always tried to work with our staff to meet their family and personal needs along with offering them a decent job. I’ve been trying to put together some information from immigrant rights’ groups to give to them and our management so that we insure that people are treated fairly under the law

How have immigration policies impacted your business in the past?

I have lost two employees to deportation. Both had documents and I know for sure one was here legally, but one had a DUI and another had a drug possession offense and were picked up and ultimately deported. Just because an immigrant is legally here doesn’t mean they’re safe from deportation. Both occurred under the Obama administration. Trump’s rhetoric may be harsher, but this has been an issue of concern for many of us long before Trump became President.

How do you expect immigration policies to impact your business going forward?

I think for most of us, we still don’t know.

So far, it seems like Trump is just continuing previous administration policies, focusing on those with criminal convictions. But I don’t think anyone really knows yet whether ICE has increased its enforcement or not. I don’t know that we will know for months until we start seeing the statistics and hearing more personal stories.

I think the biggest fear is that ICE under Trump’s administration takes a more aggressive approach where families are torn apart or children who have spent their entire lives in the United States are forced to leave their schools, leave their friends, and leave the country.

I think there’s a very legitimate case to be made for deporting criminals. The argument is really over what level of criminality should result in deportation. But casting wide nets with raids and the like where anyone can be swooped up and sent home is worrisome.

I’ve talked to immigrants from places like Honduras who escaped dangerous and deadly situations, where their husbands were forced to join criminal or military groups or have themselves or their families threatened. They really just want to work and be somewhere safe. They are the definition of refugees. To send them back seems unnecessarily cruel.

I don’t think a lot of people appreciate how lucky we are to have immigrants from under-developed countries – the real advantage it is to our workforce. We get a lot of naturally bright and ambitious workers in this country who might have been engineers, doctors, computer programmers, or entrepreneurs in their home countries had they had the opportunity. Instead, we get a really smart line cook or construction worker who often rises to become chef or foreman.

In their home country, they might not have had the educational opportunity or the resources to get a professional job. Hell, they might have been lucky even to have a job. But they come here with their under-utilized abilities and hope for a better future for their family and we become a better nation for it.

They have drive. You can see the intelligence in their eyes. I’ve felt quite blessed to have these people work for me.