Home » Blog » Education » The Art of the Side Hustle

The Art of the Side Hustle 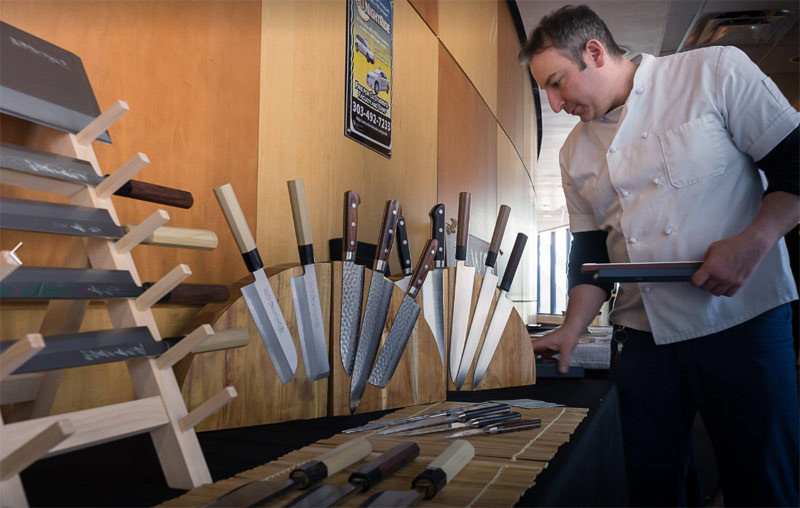 The Art of the Side Hustle

A little something extra, the side hustle

In today’s working environment, the ‘side hustle’ is becoming more and more common. Sometimes even the most dedicated culinary professional needs just a little something extra to keep them occupied. From moonlighting to catering to driving Uber/Lyft to starting an online business, there are endless possibilities to make an extra buck, or even better, to dive deeper into your passion.

One master of the side hustle is Denver’s Elan Wenzel. Already working 50+ hours a week at Sushi Sasa in Denver, Wenzel couldn’t help himself from putting in even more hours running his online knife business, Element Knife Co.

It started simply enough – while working at the restaurant Wenzel made friends with a traveling knife salesman named Tetsuya “Ted” Arisue who represented Yoshihiro knives – a Japanese knife brand. Ted was only selling knives to Sushi restaurants, but Wenzel knew the demand for top-flight cutlery went deeper. Without thinking about anything more than helping connect his chef friends to better tools, Wenzel drew up a list of restaurants for Ted to visit. Ted invited Wenzel along for his sales calls and they struck up a friendship that would later become Element Knife Co.

“I’m a gearhead and have always loved knives,” said Wenzel. “It was an absolute love affair when I fell into sushi and discovered Japanese cutlery. At the point that I had an opportunity to start selling knives I realized that I could share these incredible tools with my chef community.”

Growing the side hustle

While Wenzel still makes sales calls, he saw the need to also sell his wares online. Building the website wasn’t easy, though. After some false starts, Wenzel reconnected with a friend from his high school days who works as a poker dealer in Las Vegas. Looking for his own side hustle, his friend volunteered to build the website on the Shopify platform, which vastly simplified the effort of creating an ecommerce business.

Wenzel runs Element Knife Co. out of his house. “Without a brick and mortar I keep my pricing low, which is important to me because as chefs we typically live paycheck to paycheck. For me, I’m really trying to find a way to give back and share expertise.”

Element Knife Co. launched its site in May and has started selling knives to a national audience. When asked what advice he’d give others looking to start a side hustle, and to grow it into a full-fledged business, he responded “If you want to start a side business, it’s in the doing. Simply start and make the effort. Things will fall in line and steps you need to take will organically reveal themselves. Stay determined, stay positive and have realistic expectations.”

By marrying his passion for knives and his desire to help fellow chefs, Wenzel has built a business that adds value to his community. If you are looking for an example of how to take an interest from a side hustle to an active business, look no further than Elan Wenzel’s Element Knife Co.