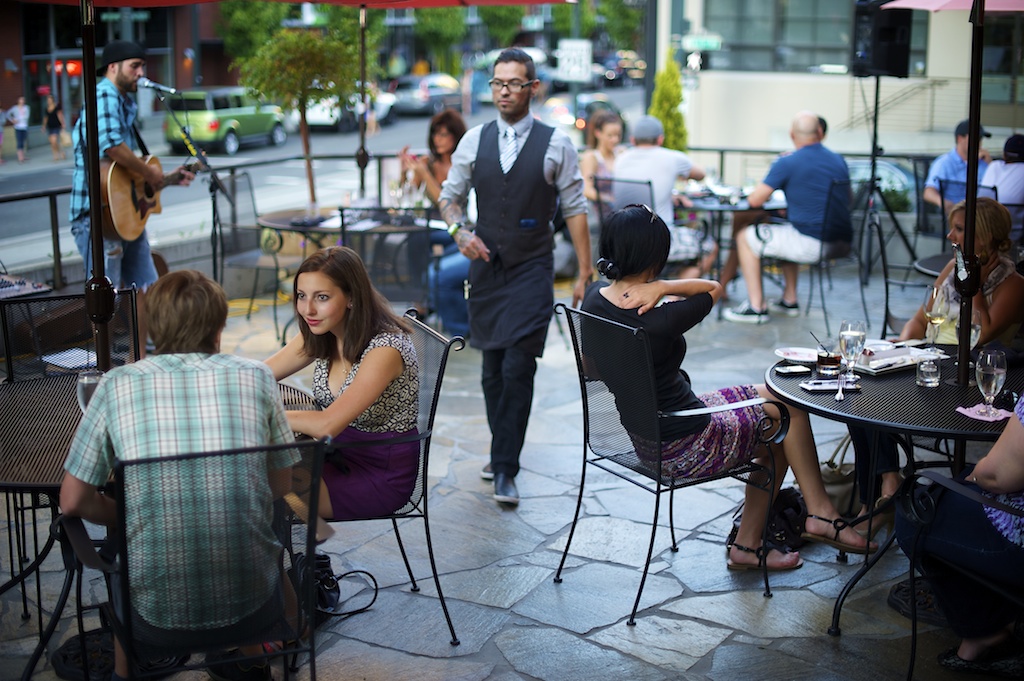 Creating an outdoor summer patio is an enticing project, but it takes careful planning to get it right. We asked Clea Partridge of Café Castagna in Portland, OR her top dos and don’ts for establishing an outdoor space that draws and delights diners (and hopefully drives up sales.)

At Café Castagna, the summer patio nearly doubles the daily business, which means doubling the workload for servers, cooks, and dishwashers. “We often hire summer help, mostly in the form of support staff—extra bussers, etc.” says Partridge. There are a lot of labor intensive details, for example the patio furniture, umbrellas, and dining wear have to be hauled inside at the end of the night. “We end up working later nights, but everyone makes a little more money and hustles a little harder. I do adjust the sections so everyone’s role is spread out a little more.”

Don’t: Underestimate the power of nature.

• If your patio is under trees, be wary of falling sap, which can harden on your tables to the point it requires a chisel to remove it. Cover them when not in use, or bring them in at night.

• Make sure you check the weather. Customers will say they’re willing to take the risk – but if it starts raining they’ll want to come indoors.

• Beware the nosy noses of urban wildlife. Don’t leave leftover food unattended for long and be sure to clean up the space before closing to dissuade neighborhood raccoons and cats—which Partridge has had to personally shoo away.

• Remember – people are unpredictable. Partridge says it’s important to have a plan in place to deal with sidewalk harassment. Make sure the onsite manager is instructed on how to deal with random panhandling and the occasional drunken frat boy.

“I’d say having hard and fast rules about dogs is something to establish early,” says Partridge.“People always want to bring their dogs to patios, but it can cause some major issues. First off, they can be underfoot and dangerous to servers. Second, people think their dogs are friendly, but dogs have their own language and they don’t always get along with each other.” To prevent a canine catastrophe, the café keeps three tables at the edge of the patio reserved for diners with dogs.

Also, check in with your local health inspector about regulations and variances (and on what they’ll let slide…)

Despite closing at 10pm, Cafe Castagna closes their patio at 9pm to prevent noise pollution, out of respect to their neighbors. We suggest you show the same consideration if your restaurant is in a dense residential area.

Do: Create an irresistible evening ambience.

There’s nothing more romantic than twinkling lights and candle glow at dusk. Café Castagna uses battery operated lights under their umbrellas, which illuminate upward for a glow that cascades back down onto the table. While providing ambience is lovely, the ultimate goal is for patrons to have enough light to easily read the menu, and see where they’re going when walking.

Don’t: Expect your staff to be excited about patio season.

“I’d say most of the staff dislikes patio season,” says Partridge. “It’s a ton of extra work — especially dragging it all in at the end of the night — you end up walking a lot more so your body and feet are way more exhausted than normal.” Plus, you’re adding tables to the floor, without adding much capacity to the kitchen. Try to be aware of your staff’s needs and address them quickly.

Which leads us to:

Do: Set your staff up for success.

“It’s kind of a rough section because you’re outside, far away from everyone else, far away from the dish pit, the kitchen, the sink, all your resources,” says Partridge of the patio. “We do our best to make sure the outside caddy is stocked with everything.” Partridge even takes it upon herself to help set up in the morning, because hauling out the furniture and stocking the cart takes extra time. “There is extra work to be done for sure,” she says, but that’s nothing compared to the fun of getting a chance to “bust ass with your coworkers.”